Hi, everyone! Nigel here. Thought it might make for an amusing diversion to let you good folk in on the kind of things that went on at our house over Christmas & New Year. Well, of course, we started with the decoration, two weeks before Christmas. While Heather was tapping away on her many keyboards, getting more colours of Trinity, Beckett, and Piper ready for launch, I put up our Christmas tree, which is shown in the picture above. It's an artifical tree Heather has had for a while, now, and bedecked mostly with decorations we picked out together in 2017 (although there's a 2020 "Dumpster Fire" 3D-printed ornament my old friend John Fu sent us last year).  Once the "main event" was erected, I got the rest of the decorations set up, some of which we already had, some of which Heather ordered this year and had arrived only recently. We had a little table-top tree in white with fiber-optic lighting that I put on our kitchen counter, and Heather's old and beloved Charlie Brown Christmas tree, which was put on a small display table. There were some ribbons and stars set out around our TV and fireplace. Heather's old light-up, colour-changing snowman (named SNOWMAN!) came out, and was put alongside a new wooden standee snowman, who because of his spectacles and studious air, was dubbed "Benedict Cumberbatch." And, of course, we have light up animals: a Santa-themed sauropod dinosaur (named Sanctonyx -- literally, "Sainted Claws") . . . . . . and a cheery bescarfed cardinal (Redboy!) who sheds red glitter like an absolute mofo: I also put some lights up out in front of our house, the first time we've done that since we got together. Heather had even ordered a huge, 6-foot illuminated snowman with a cardinal on his hand from Hammacher-Schlemmer, which she requested months ago, but didn't arrive until three days before Christmas, so we got a discount. He was a struggle to put together, and he rained glitter like someone picked up an entire Kindergarten classroom and shook it, but he made Heather very, very happy, and that's what matters. A couple of days before Christmas, Heather's business partner, John, stopped by for a businessbusinessbusiness confab with Heather, and also brought some prezzies for us, from himself and Jamie. We put those under the tree with our other stuff.

Once the mise-en-scène was set up, we made sure we had enough to eat. Heather had a fun notion of trying a Japanese tradition and ordering KFC on Christmas Eve, but they cancelled our order, and we ended up getting food from a local Middle-Eastern place, instead, which was excellent. (A couple days after Christmas, John brought some KFC, anyway, and we thoroughly clogged our arteries that night.)

For Christmas Day istelf, there were of course loads of horrendously unhealthy and yummy goodies and snacks, and for The Big Dinner, we had a leg of lamb, some root vegetable fries, gravy, and cornbread stuffing that I made while Heather took a much-deserved day off. For dessert, much later on that evening, we had an imported Christmas pudding, which I nuked in the microwave, further drenched with splashes of brandy and rum, then lit on fire before carving. Nothing quite like watching your dessert burn with ethereal bright blue, orange-tipped flames in the dark for a minute or so!  And we topped it with what I think must've been the best batch of brandy butter I've ever made (though I say it myself). It was all atrociously calorific, and obscenely delicious. We were, to paraphrase Monty Burns, "wallowing in our own crapulence" for a day tor two afterward.

As for presents, the parcels John brought over for us contained some nifty books (I'm already one down, with three to go). I bought Heather a jokey "How to Identify Birds" T-shirt that caught her eye. Heather bought me a waterproof carrying bag for my laptop, and some English goodies -- lime cream, rose cream, and lavender cream chocolates, and some mince-pie-flavoured digestive buscuits -- which I SWEAR I spaced out responsibly and did NOT scarf them all down in one day. HONEST. And, to demonstrate how challenging These Challenging Times are, I STILL haven't received a present I ordered back in July for Heather's birthday; it's STILL on "pre-order," fer cryin' out Pete's sake. A couple of days earlier, we'd received a package from Heather's dad and stepmom, of a battery-powered Thomas Kincaid sculpture, called "A Warm Winter's Glow," of a snowman next to a branch full of various adorable woodland birds. There's a lantern and a campfire that light up and flicker, and it plays Christmas tunes (and supposedly birdsong as well, but we haven't found that setting, yet.) So this year, between the aforementioned deocrations and the abovementioned present, we quadrupled our snowman population at our house.  Which is fine; they're jolly and festive . . . and remind me to be grateful that Heather has a penchant for lumpy white guys who like old-fashioned hats.  😉

Heather's brother and sister-in-law sent us a huge crate of different flavours of gourmet popcorn, which Heather is eager to tear into, once we've recovered from the holiday excesses.

New Year's was slightly less indulgent. John and Jamie came over, we watched the ball drop in Times Square -- YAWN! You'd think a company called "Planet Fitness" would've organised something a bit more high-energy and entertaining. After that, we watched the vastly superior London display, with fireworks, giant floating holograms over the River Thames, lots of piped music, and a choir who sang a medly of -- SIGH -- Abba tunes. Some of us drank, and all of us polished off the Christmas pudding and brandy sauce.

And then, in the small hours of the next night, high winds blew over our giant outdoor snowman. But he was staked down very solidly, and didn't blow away, and I was able to pry him up and put him in the garage, out of harm's way.

So that's it, gentle readers. Nothing mind-blowing, extravagant, or raucous, just cozy and low-key. Laughs were had, belts were let out a notch or two, and hopes for a better year in 2022 were hoped. I plan on "tearing down" on Twelfth Night, and that draws the curtain on Yuletide 2021. We hope that you all had a pleasant holiday season, however you celebrated it, and we look forward to seeing you soon on the Saturday livestreams!  In the meantime, why not check out some details on our lusciously long new Trinity wig?

I finally caved and got a wig in one of the lighter "different" colors. I was hesitant to go with rooted "anime hair," but at the sale price, it was worth the chance. It took a bit to get used to me in Moonlit Orchid-R, and my spouse didn't think it did anything for me. I wore if a few times out during the summer and got some compliments and surprises. It's now a game for me to see which Felix wig of mine I'd end up wearing on the day I wear one of those styles (I'm now up to five Felix wigs in different colors). The fit works as always. In fact, the cap on this wig may be a touch larger, which gives it an even better fit. And I don't have biohair to speak of, so most of the time I don't need a nylon cap to keep it from the occasional itch. If my own hair grows out a bit, I usually do need that cap. I lovelovelove the curls on Felix and don't regret getting another one. 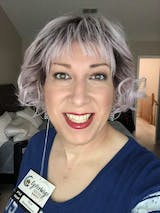 I’m now on my sixth Felix wig, and the second one in this color. The first one ended up being used to practice my curling skills, which are progressing slower than I had hoped for.

So I bought a second Felix wig in Chocolate Icing-R. This one falls right into the sweet spot of my usual color range. I ventured into blondes and purples with the other ones, but this Felix feels right as the days get shorter. I gravitate toward my brunettes and reds at that time, and usually my longer styles. But Felix remains a great grab-and-go wig for me. I don’t need to fuss with lace or taping ear tabs. All I do is shake, put on, tweak a bit and go. As always, the fit is just about right and quite big-head friendly, as intended. I’ve argued that Felix is my alternate One Wig to Rule them All, if I need that quick-change and am pressed for time. If the colors work, I’ll keep buying Felix. 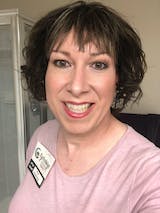 I have so much confidence with this wig. I work as a nurse. The style is professional and the color helps lighten the mood of others. I get compliments on top of compliments. I easily added bangs that cover my forehead, my preference. 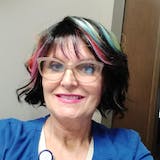 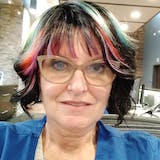 I love the color of this Piper. 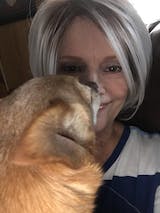 I will be honest. I have avoided getting this color because I thought it wouldn’t look good on me. I love warmer blondes and reds so I was very pleasantly surprised when I put her on. Overall on me ( I have peachy skin undertones & I’m considered a bright Spring) it’s a muted grayish peachy pearl color on me. Very light but not bright. Indoors and in lower lighting conditions this color looks gray….but here’s the kicker. It’s not gray it’s not that cool icy silver gray..iThere is no gray in this blend it’s an illusion to my eye it’s a soft warm gray…I love it. The colors are very subtle & visually blend together so well. Heather designed and created a color masterpiece once again. I love the style of Anya she is so pretty and easy to wear. This is a larger fit for me. I take the nape adjusters in and she fits snug enough for now. I will probably alter the cap to fit my head perfectly. I highly recommend Anya in Mermaid Kisses-R you will love her 💕 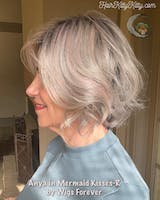 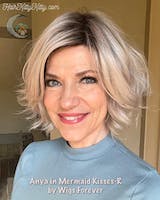 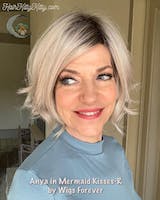 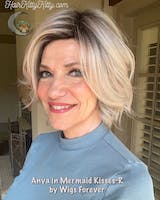 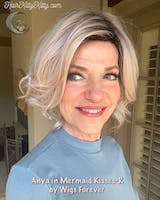