The Science of Skin Undertones

Most of us know that melanin is the little pigment molecule that determines skin tone. This isn’t the whole story, though.

There are two main types of melanin called pheomelanin and eumelanin. Pheomelanin is a molecule that produces reddish/yellowish tints. This is also the same molecule that makes hair red. Eumelanin is slightly blackish-blue in appearance. Undertones do not change because they are based on the type of melanin that is predominant in your skin. However, skin damage and Father Time can change the outer layers sufficiently to make the undertones more apparent. Sunburns and rosacea, for example, may amplify pink undertones. You’ll always have the undertone you’re born with.

“Cool” undertones are from having more eumelanin than pheomelanin in the skin.

“Olive” undertones also have more eumelanin than pheomelanin in the skin, but there is just enough additional pheomelanin to give the skin a subtle green appearance.

“Neutral” undertones have a balance of nearly 50/50 eumelanin and pheomelanin.

“Warm” undertones are from having more pheomelanin than eumelanin in the skin.

FWIW: Heather is a neutral-cool with “light” skin. A good way to think about the light-to-dark ratio of your skin’s overall appearance as a reflection of the intensity of pigment molecules. It’s science, and it doesn’t assign a value based on these things. Also, remember that undertones are slightly different than your intensity levels. Light intensity tones can have olive undertones, and dark intensity tones can have cool undertones. We’re all unique. That makes finding your undertones kind of frustrating, but also interesting and very rewarding!

Click HERE to find the best colors for your undertone

I have a number of ambroses - 3 ambroses and 2 ambroses 10 inch. I love them more and more, especially the 10 inch ones. Its length reach just right at the nape and it’s perfect on a hot day. I wear it during the Lunar New Year to visit my relatives and it makes me look damn pretty. I also got compliments that I become prettier with each passing year. Who wouldn’t like such compliments? 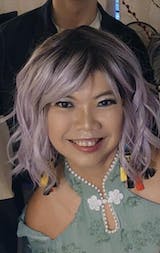 I adore Suri…such a flattering bob. She has face framing layers that I love. The fibers are silky soft. She has a roomy average fit and she’s so comfy. All I did was take in her nape adjusters and she fits me fine. I don’t even feel I have a wig on. Sure I’ll alter the cap to fit me better at some point but really no need to. I decided to play around with this Suri. I started with parting her in the middle and using my hot air brush ( the plastic kind with rubberized ball tips for the brush..doesn’t get very hot unlike a blow dryer -remember these are not heat friendly fibers) I added some lift at the crown. There is permatease so if you want you can get some volume on her which I like. In the end I used my hot air brush to reshape the front to my liking and added some fringe. She is so cute with fringe. Moonlit Orchid-R is a wearable pretty fashion lilac. A little cooler and clearer in color than the CysterWigs Limited heat friendly version. I can’t wait to get my Whipped Honey-R Suri. I would love to see Suri in more colors. An easy throw and go versatile style that I highly recommend 👏🏻👏🏻👏🏻💜 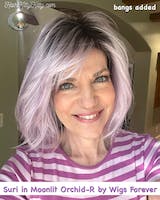 I have a few Charismas..they are so fun and each one is a little different. Similar to Ainsley in cut but with a unique textured curl pattern in back. Since she is made with beautiful heat friendly fibers I decided to curl/customize mine even more. I curled the bangs, sides, and the top closer to the crown. ( I didn’t curl the back at all or trim or thin her) Charisma curls so well and stayed super soft and silky. I am very impressed with these fibers. The best I have come across in all the years of wearing wigs. The color is my jam a vibrant gorgeous red copper with a dark brown root. She fits well and is quite comfy. Charisma comes with a right side part..so it takes a little finagling to give her a meandering kinda left part ( that’s my preference) I love this wild child and highly recommend her. 👏🏻💕 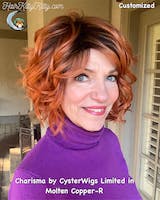 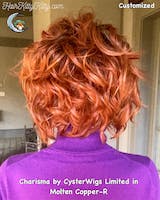 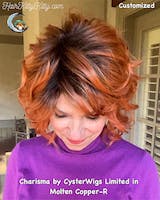 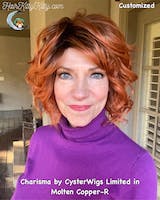 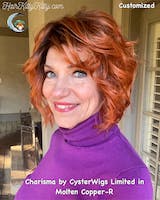 K
Danica Wig - Molten Copper Rooted Karen Hartfelder
Likes: The outstanding color is dynamic, brilliant and unique. The style is flattering. The fibers are soft with nice movement and low density. I do like the heat resistant fiber that allows for some styling although this piece really doesn't need much.
Color: The color is beautiful. I only like a nice rooted shade with dynamic shading. This color contains multiple shades mixed and ombred. So, not only does it have a gorgeous basic shade, but intermixing of various shades ensure the color is not flat and dull.
Comfort and Fit:
Fit: Large
NPS score:
Unique Beauty

This gorgeous wig came just as described with amazing color and style. It's unique in both, receiving well deserved compliments at every outing. 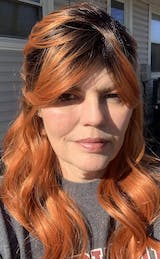 Grayson is a heavily layered mid length style that imo is universally flattering. If you are dipping your toes into longer styles she is a good one to try out. She has permatease so you can get some good volume if you so desire. I love having that option. She looks cute tucked behind the ears too. I trimmed some fringe into mine but she looks great right out of the bag. This color is a dynamic highlighted cool brunette…the base is a nice natural brunette and it’s the cool blonde fine highlights that gives this color an overall cool vibe. Soft and pretty…not over the top. I highly recommend Grayson and HairKittyKitty.com 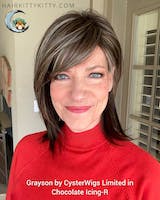 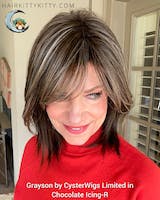 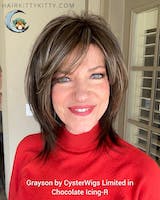 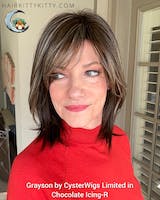 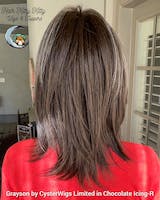